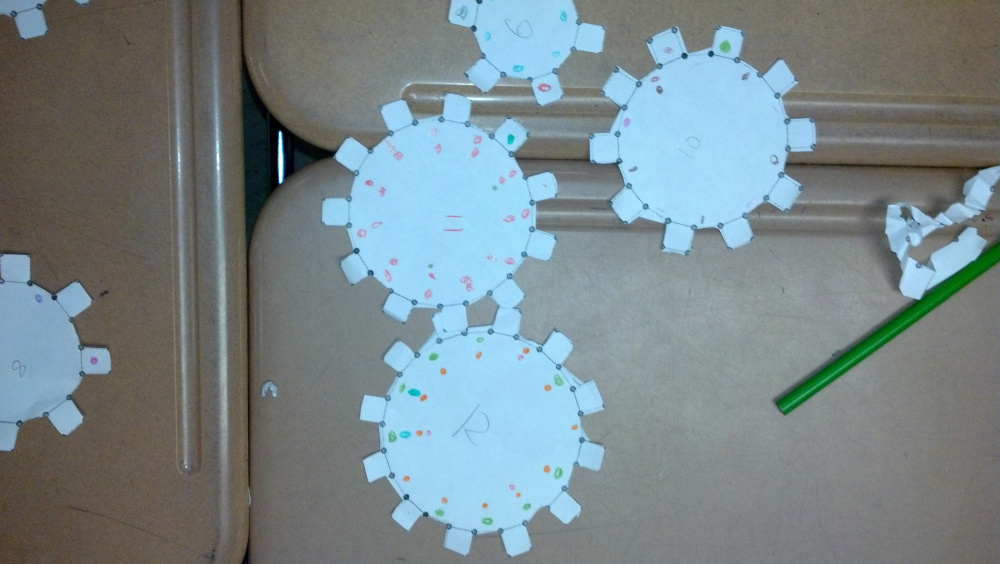 Posted on November 8, 2015 by Bryan Penfound

“This problem requires children to think about factors and multiples and, in particular, common factors, but it is not necessary for them to have met this term prior to having a go at the task. It offers opportunities for pupils to ask their own questions, find examples, make conjectures and begin to generalise.” -excerpt from Youcubed website

Today I want to review one of Jo Boaler’s lessons from youcubed.org. I recently came across a grade five class where the teacher used the “Counting Cogs” activity, which can be found here.

While the instructions are fairly straightforward for an adult mind, no consideration is given to students who are novices to following instructions. The working memories of the grade five students quickly got overloaded and I had to intervene by telling them one direction at a time. Almost every group came to me or the teacher to ask us what to do since the instructions for the students were not clearly expressed on the handout. It was not that the students were not listening at the beginning of the lesson, it was because they would read the lesson, be overwhelmed by the number of tasks they had to do, and lose their indication of where to begin.

To counter this, I began by telling the pairs of students to cut out the nine different cogs. This was a bit of an annoyance, since it took more than half the class for the grade five students (even while they were working in pairs) to cut the cogs out. So now the students were learning how to cut along the lines properly, rather than focusing on the mathematics that the lesson was supposed to be engaging the students in. I felt more like a babysitter for the first half of this class than a mathematics teacher.

After a pair of students had successfully cut out the cogs that they were going to use, they again got overwhelmed by the instructions. Think about it: students were expected to colour in one tooth, move the cogs around, follow where the coloured tooth would land, keep track of all the places where the coloured tooth landed, know what a cog was, know what a “tooth” (in reference to a cog) was, and then start to find patterns all while working with a partner. Talk about working memory overload! For every group, me or the teacher had to model how to colour in one tooth and how to keep track of the gaps where the coloured tooth landed. Again more wasted time.

The lesson focuses around the following key questions:

1) Which cogs have you found that work so far?

2) Which pairs didn’t work and can you explain why?

3) How could you predict if a pair will work before you try them?

Before we even get too far into this section, what is meant by the word “work”? It is such a vague word in this context. How will a grade five mind interpret this question, especially if he/she has no schema for cogs? Does “work” mean the coloured tooth enters the same gap each time? Does it mean that the coloured tooth enters only a few gaps? Maybe all the cogs “work” in the sense that they can rotate around each other! So there is a lot of potential confusion around this vague term. The teacher and myself took it to mean that the coloured tooth would land in each of the gaps of a different cog. Yet another aspect of the lesson that had to be explained to the students.

Next, go back and look at the choices we have for number of teeth. Do you notice a major flaw? The only odd number that is not prime on our list is 9, and we do not have a cog with 3 teeth, so GCF(5,7,9,11) = 1. Thus, all of the odd-toothed cogs are going to “work.” So a common misconception of the students was to state: “If two cogs have an odd number of teeth, then they work.” This is certainly true of the activity (because it has a major design flaw), but we know this is not true in practice: GCF(3,9) = 3, so a 3-toothed and a 9-toothed cog would not “work.”

Similarly, since the only pair of cogs sharing a factor of 3 are the 6-toothed and 9-toothed cog, most students didn’t even get to this pair (there are C(9,2) = 9!/7!2! = 36 different combinations to choose from, or a 1/36 = 2.78% chance of picking this pair). So they, again, often concluded incorrectly that a pair of cogs, one with an even number of teeth and one with an odd number of teeth, would always “work.”

The first major problem of the activity is that it doesn’t meet students at their cognitive level. The instructions overloaded the working memories of the grade five students, even after the teacher broke the lesson down into more manageable chunks. At this age level, students likely have no idea what a cog is, or what a tooth is (in this context) and will eat up a lot of working memory space just processing that. Then they have to add in the colouring of the teeth and the movement of the cogs – all of this definitely becomes very overwhelming for novice learners!

The second major flaw is the poor design. For a lesson that is centered around GCF and factors, one would hope that the misconceptions of GCF(2m+1,2n+1) = 1 and GCF(2m,2n+1) = 1 could be avoided. Realistically, addition of a 3-toothed cog, and removal of the 11-toothed cog would do the trick.

While the design of the activity is to have students using cogs to discuss the ideas of factors and the GCF of two numbers, the lesson falls utterly short of what its intended goal is. When introducing such an important idea as factors and the GCF of two numbers, does it not make more sense to use explicit instruction followed by discussion of some worked examples? This would not be a difficult thing to do using pattern-recognition (skip-counting and making lists for example). Also, explicit instruction has the advantage of not creating the misconceptions that this poorly-designed activity does.

I do want to remark that I actually enjoy the premise of the activity. I believe that it would be interesting to do after the students have an elementary notion of what factors and the GCF are. If students have some preliminary knowledge, then the discussion may reinforce their prior knowledge. Also, the lesson extends nicely to the ideas of prime numbers and the LCM. We can keep track of how many teeth hit the first cog before the coloured tooth comes back to the start to find the LCM of the two cogs, for example.

Altogether, as a teaching tool, the cog activity is not worth it. Maybe if it was redesigned a bit to account for some of the cognitive overload it places on the students, and to remove some of the possible misconceptions that students may create. Even then, I probably wouldn’t use it as an introductory activity for factors or the GCF (although it does have nice potential to reinforce prior knowledge in my opinion). Introduction of these key ideas is better done through explicit instruction and working with patterns of whole numbers. If I did use this activity, I would definitely decrease the number of cogs (remove some of the prime toothed ones), and cut them out myself so I am not wasting copious amounts of precious class time!

To leave you with some food for thought: Did you notice that my discussion of the GCF and LCM are not on the teacher handout? Go back and check for yourself – there is no connection to mathematics at all on this handout! Do you not find it odd that the most interesting aspects of this activity are not even mentioned to the teachers who would be using the activity? It makes me wonder if Jo Boaler has the best interests of the students/teachers in mind. How can students/teachers develop “rich and meaningful connections” to mathematics if the proper mathematical vocabulary isn’t even introduced? Very bizarre indeed.