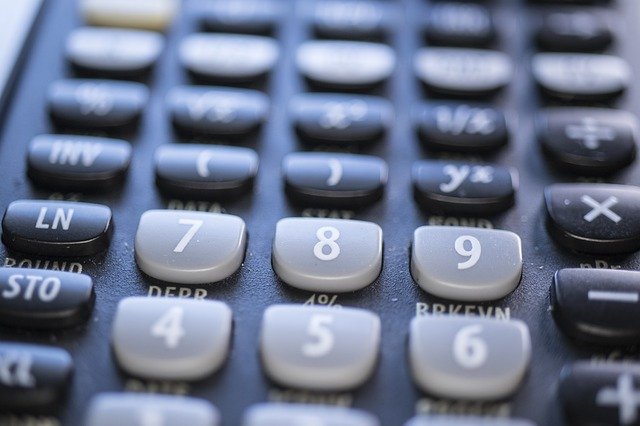 There are several instances in our course where it might be helpful to compare two quantities. A ratio is a way to compare two numbers. The numbers involved might be counts or measurements, meaning they might have an associated unit, or they may not. Most of the time the quantities involved in a ratio are positive.

A ratio can be denoted in words, using a colon, or using a quotient. For example, if we would like to compare four apples to five oranges in a ratio, we might say “The ratio of apples to oranges is 4 to 5.” Using a colon, we would write

. Finally, using a quotient, we would write

. Since we are able to write a ratio as a quotient, this means that a ratio could technically be written as a decimal number or as a percent as well. Since we will often be working with monetary values, we may opt to view ratios as decimal numbers when appropriate.

A ratio involving two different measurements is called a rate. If the second number being compared is the number one, then we have a special kind of rate called a unit rate. Unit rates are quite common: a traffic sign telling you the maximum speed is 80 km/h (80 km to 1 hr), your computer program telling you you type at a rate of 75 wpm (75 words to 1 min), or the supermarket stating a unit price of $1.20/lb ($1.20 per 1 pound weight). The video below will discuss how to create a unit rate given two different quantities.

An equality involving two ratios is called a proportion. One way to write a proportion is by using colon notation and an equal sign, such as

. However, it is often easier to view a proportion as an equality involving two fractions, such as

A helpful technique when working with proportions is to be able to solve for a missing value in the proportion. The simplest way to do this is to multiply both fractions by the values in the two denominators (the most efficient way is to use the LCM). The video below will guide you through a few examples of finding a missing value in a proportion.

This is a dated photo, but let’s assume we have just landed in Australia and we see this screen. We would like to convert some of our Canadian dollars (CAD) into Australian dollars (AUD). The kiosk will buy CAD at a rate of 1.178 CAD to 1 AUD; that is, it will take 1.178 Canadian dollars to purchase one Australian dollar. If we wanted 500 AUD, we would multiply by the buying rate to obtain how much CAD it would cost us:

Next, let’s assume someone approaches the kiosk with 500 AUD and would like to exchange to Canadian dollars. The kiosk sells Canadian dollars at a rate of 0.971 CAD for 1 AUD; that is, for every 1 AUD we give, we will obtain 0.971 CAD in return. In this case, we also multiply the amount of AUD we have by the given rate to determine how much CAD we would receive:

. Notice that even though both examples used 500 AUD, the purchase cost 589 CAD, but the sell only gave 485.50 CAD. This difference, known as the buy-sell spread, is how the kiosk makes profit. In this case, there was a

Using the same kiosk information, see if you can work through the following scenarios. You can check your answers by viewing the following video.

A percent is a special ratio that compares a number to 100. Per cent is French for to one hundred, so when we say

we are comparing 80 to 100. There are three numbers involved in a percent: the two numbers associated with the ratio, and the percent number. For example, the ratio

can be viewed as

. For our course, you should be comfortable finding any one of these missing values. Try the following questions, then watch the video below to check your work.

In our course, we will be using percent almost on a daily basis. Many financial calculations involve percent, such as interest rates and taxes. We will deal with interest throughout our sections on simple interest, compound interest and annuities. For now, let’s focus on tax rates. A tax rate is the ratio at which a business or a person is taxed. Typically, this ratio is given as a percent. For instance, in British Columbia consumers pay a federal

on most purchases). There are many exceptions to these base rates, such as no GST on basic grocery items, no PST on restaurant bills or children’s clothing, and a

PST tax rate on all alcohol purchases. As you progress in your business career, you will explore the exceptions to the basic rates in more detail. For now, give the following a try (keeping in mind our basic exceptions):

You have seen in the video above that a tax rate can be applied to a dollar amount by performing multiplication. That is