Consider the following question: What is the maximal amount of money you can have at the end of a one-year investment if you are only permitted a principle amount of

? This question was first explored by Jacob Bernoulli in 1683, to which he assume a few things. First, he assumed that for the maximum amount at the end of the year, we should have a

(one dollar principle amount), and

Next, he noticed that the future value depended on the frequency number

, at the end of one year we would have

in our account. What happens if we are allowed to increase the frequency of compounds throughout the year? Well, remember that compound interest allows all interest earned in one compound period to earn interest in the subsequent compounding periods. This means if we increase

we have the capacity to earn more money! The following chart summarizes how much money our investment will have at the end of one year for a few different frequency numbers, rounded to five decimal places. 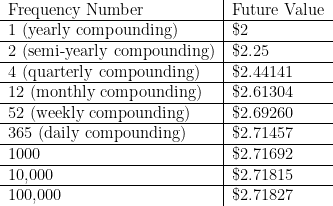 Notice that, even though we continue to increase the number of compounds way past daily compounding, the overall future value at the end of one year doesn’t fluctuate much as our frequency number gets into the ten-thousands. It seems as though the maximum amount of money we can earn over the course of one year is around

You may notice that the future value in the final row of our chart above is similar to a number we have seen in Lesson 4.3. The compound interest problem discussed above is exactly where Euler’s number

was first discovered. Despite knowing this fact in the 17th century, the use of the letter

to denote this number was not common until Leonhard Euler used it in 1736.

For the purpose of our course we will need the following two facts: the first is that

gets large, and the second is that

gets large. Knowing this, we can rearrange our future value formula for compound interest in such a way as to maximize the amount of revenue we obtain over a period of time.

If we now allow

to get large, we can make the substitution of

is known as the continuous compounding formula, and will tell you the maximum amount of money your principle amount

can earn with a specific rate

over a period of

Let’s finish off this lesson by considering the following two questions: