Recall from Lesson 5.1 that a general annuity occurs when the frequency of compounds

is different than the frequency of payments

for general annuities, we will need to develop a new tool to help us with these types of problems. The tool we will require is a formula to help us convert between between interest rates that have different frequencies. In order to develop this tool, we first look at the idea of effective interest rates.

The first step in solving the general annuity problem is to do some algebraic work with interest rates. First, let’s consider a numerical problem: an interest rate of

compounded monthly and an initial deposit of

(these numbers are chosen at random for convenience). We know by the future value formula for compound interest that after one year we would have:

, we should be able to solve for 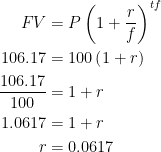 compounded annually is effectively the same interest rate as

compounded monthly since they give the same future value after one year. Given a nominal interest rate

and is denoted as

Formula for the Non-Continuous Case

Now that we have seen a numerical example, let’s develop a formula so we can calculate the effective interest for any given nominal rate. Recall that our given rate and our effective rate must have the same future value after one year (

must be equal. After we divide both sides of the equation by

, it is fairly straightforward to isolate for

This yields a formula to calculate the effective interest rate, given information about a nominal rate

. Sometimes this formula is written as

. A video outlining how we can use this formula is given below.

Formula for the Continuous Case

Developing a formula to deal with the case of continuous compounding is very similar. In this case,

must be equal. Dividing both sides of the equality by

A video outlining how we can use this formula is given below.

into a new rate, called

. To ensure that they will give our customer the same future value after one year, we set their effective interest rates equal. That is, we say two nominal rates

are equivalent rates provided that their effective rates are equal.

Formula for the Non-Continuous Case

So given the compound interest rate

, how do we find the rate

if we know the frequency

? Well first, we need to ensure that their effective interest rates are equal so that the future values are the same. To make answering this questions easier, we will also use

and try to solve for

From here, we would like to remove the power of

, and we can do this by dividing this power on both sides of our equation (note that this is equivalent to taking an nth-root, but it will be easier to view it as a fraction for calculation purposes).

. This is precisely the formula needed for us to solve the general annuity problem. A video outlining how we can use this formula is given below. Examples of how this will apply to annuities are in the lessons following this one.

Formula for the Continuous Case

Developing a formula to deal with the case of continuous compounding is very similar. In this case, let’s take

to be continuous and

to be non-continuous. We will have to remove the power of

by dividing once again.

times per year. A video outlining how we can use this formula is given below.